Published on July 9, 2013 by ccbsuperior in News & Events 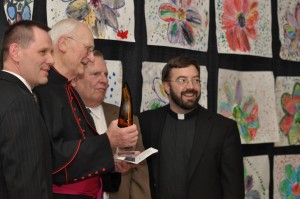 On Friday, May 17, 2013 Msgr. Philip Heslin, Diocese of Superior,  was honored with the Lumen Christi Award at Cathedral of Christ the King.

Pictured at left (from left to right): Alan Rock, Catholic Charities Executive Director, Monsignor Philip Heslin, Brian Soland, Catholic Charities Retired Executive Director, and Rev. Andrew Ricci, Rector, Cathedral of Christ the King
Msgr. Heslin, a Chicago native who came to the diocese in 1957, was honored for his many accomplishments and devoted service spanning over 57 years.

Upon acepting the Lumen Christi Award Msgr. Heslin entertained the large group with light-hearted memories of his many experiences including his initial introduction to his new home in the northern climate. When Msgr. Heslin first arrived in Superior, WI in the summer of 1957 the temperature was a sultry 38 degrees. 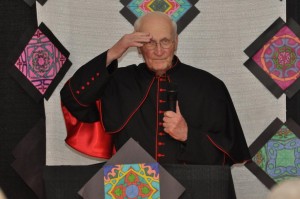 He remembers wondering what a northern Wisconsin winter would be like.

(All photos courtesy of Julie Kelemen, Staff Reporter  with the Catholic Herald

« Catholics at the Capital
Retirement Celebration for Mar... »